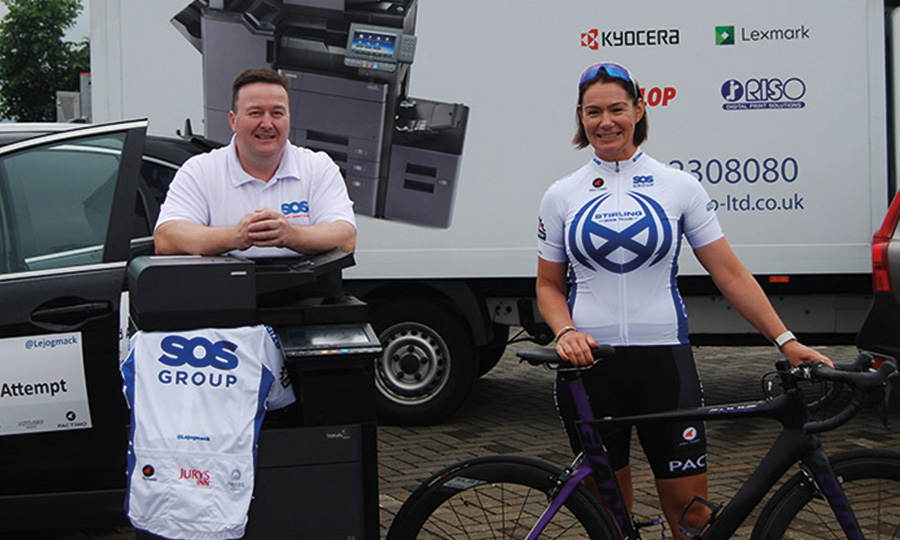 Christina Mackenzie from Stornoway had aimed to become the fastest woman to cycle from Land’s End to John O’Groats. With great determination, the 42-year-old finished with a time of 55 hours, just over two hours short of the record.

Nicknamed ‘Lejog’, by those hardy enough to attempt the challenge, the Land’s End to John O’Groats route is a punishing 839 miles. Christina may not have broken the world record but she has won plenty of admiration for her courage in tackling the ride and is now the fastest Scottish woman to complete it.

An endurance athlete born and raised on the Isle of Lewis, Christina is a former holder of the British Women’s Veterans Time Trial Association 24hr Time Trial record and has a proven and impressive track record in even the most extreme endurance events.

She had dedicated everything to training and preparing for this attempt over the last year, all whilst holding down a full-time job, and hopes she has inspired more people to push themselves to achieve more from life.

Christina says: “I’ve had some time to reflect and catch up on the messages and comments from everyone near and far and to say I’m overwhelmed is an understatement. Never in my wildest dreams did I imagine I would capture so much interest, support and good wishes.

“Over the course of the 55 hours I went through so many highs and lows and, at times, I doubted what I was doing even attempting this challenge. The support from my team helped put these doubts to the back of my mind and they gave me words of encouragement throughout. And I can’t believe the amount of people that came out to support us on the road.”

Christina was supported on her challenge by Team Valley-based SOS Group, the copy, print and scan management company, which works with a wide range of clients within the sports and fitness industries.

Andrew Skelton, director at SOS Group, says: “Everyone at SOS Group is enormously proud of Christina’s achievement in completing this ride.

“We followed her progress closely and shared her disappointment when it became clear she wouldn’t break the record. But Christina set out to help inspire others to achieve more and she’s certainly done that.”

Christina adds: “I set out with the intention to try and break Lynne Taylor’s record of 52hrs 45mins. I knew this would be a tough ask and was going to be the challenge of a lifetime.

“My disappointment of not achieving my target time was diminished after seeing how many people were following our progress and I want to say thank you to everyone that has taken the time to support me in any way. Here’s to the next adventure, whatever that will be.”