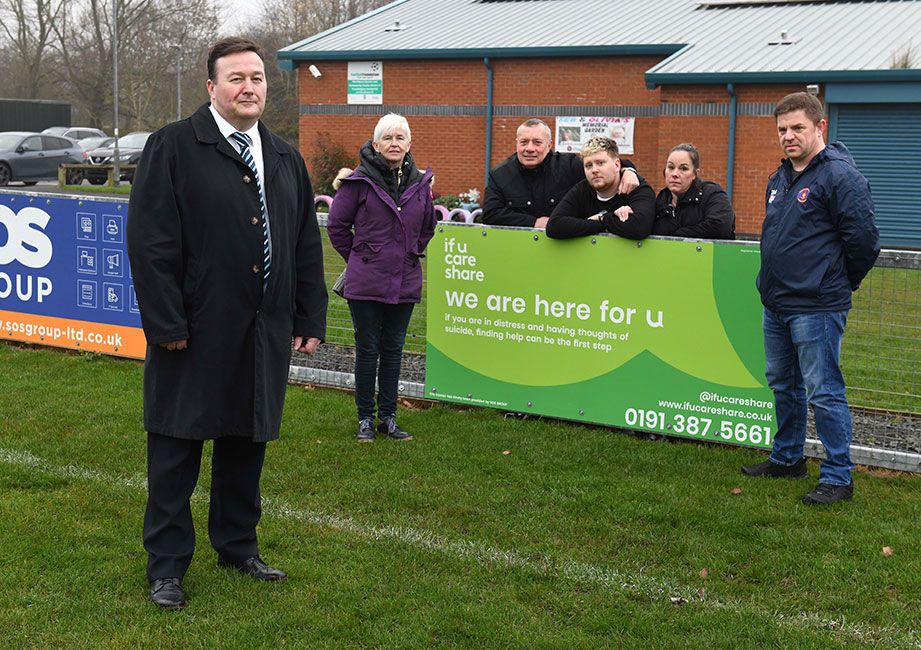 The family and friends of 21-year-old Kyle Dilks, who died very unexpectedly in October, are hoping sharing their experiences about their devastating loss will encourage others to talk and be more open about mental health.

Kyle, described as ‘a really bubbly character,’ was a popular young man from Cramlington. Very sadly, and with no warning, he took his own life in October.

A former player at Cramlington United Football Club, where his brother Corey also played, Kyle was a fan of the club and a regular spectator. Our Director, Andrew Skelton was a football coach and is a friend of the Dilks’ family.

This week, through SOS Group, a board promoting the work of the If U Care Share charity, which has provided support to Kyle’s family, was unveiled pitch-side at Cramlington United. It is hoped it will reach others who need help.

Neil Dilks, Kyle’s dad, who has been a football coach for many years, said: “It’s difficult to put into words how we’ve been affected by Kyle’s loss. He was the life and soul of the party, the centre of everything. If he wasn’t the centre of things, he’d find a way to make himself so.”

“You just need to read the comments left by his friends online to get a feel for how well-loved he was. He was just so full of energy and he’s left a huge void.”

“It’s really important to have support there for anyone who finds themselves in this situation and If U Care Share have helped us as a family. I know a lot of the people at the charity have had experience of suicide in their lives. They’re in the same boat, which helps in terms of them understanding.”

“Our message to anyone feeling hopeless or desperate is to talk about it. Speak to someone before taking a step which changes so many lives. It’s so important to talk.”

If U Care Share provides emotional and practical support to those who are experiencing thoughts of suicide, as well as support to those impacted by suspected suicide. The charity, which launched in 2005, also works alongside schools, businesses and sports clubs to provide support and advice on mental health and wellbeing.

Shirley Smith, one of the founders of If U Care Share, said: “As a charity we work hard to raise awareness of the support that we offer, ensuring that as many people as possible know that we are here to help, here to chat and that no one is ever alone.”

“We are incredibly grateful to have been given this opportunity to raise even more awareness of the help and support that is out there. Just one conversation can save a life.”

Andrew Skelton, from SOS Group, added: “Kyle was a regular at Cramlington United and was such an upbeat lad and always full of fun. His death has knocked everyone for six.”

“Earlier in the year our company offered to pay for an advertising board at the ground and, after hearing about the support If U Care Share gave Kyle’s family, we decided to sponsor a board for the charity, too.”

“This club is somewhere people come together as a community. Hopefully, seeing the If U Care Share messages along the pitch-side might help someone who finds themselves in a difficult place and encourage them to talk about it.”

The club has released a video encouraging people to talk about any issues or feelings they are experiencing and to be more open about mental health.

For confidential support from volunteers, including for suicidal thoughts, Samaritans can be contacted free, on 116 123 or by email to jo@samaritans.org.

In the North East, If U Care Share supports those bereaved by suicide and works towards suicide prevention.

Anyone experiencing mental health problems should also contact their GP for help.